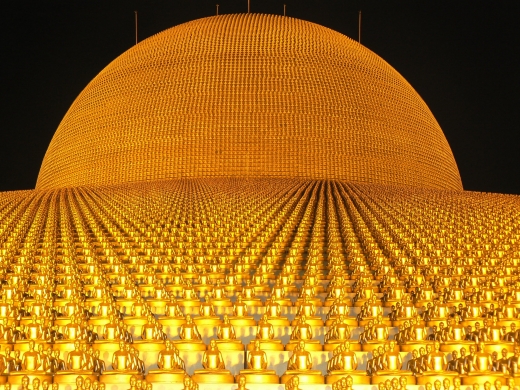 Numbers by themselves are merely data or at best, rudimentary information. Individual bits of data are rather meaningless (and thus, without much value) until we connect them to other bits of data. Take your social security number. A string of nine digits and two dashes that don’t mean much, unless you — or a criminal — attach your name and other elements to it. It’s then valuable. It’s then information.

There are different connections we can make to this 500,000 to make it meaningful. Perhaps valuable, perhaps not. We establish information’s value through the knowledge we bring to it. Consider a secret calculation for controlling nuclear centrifuges. Meaningless, and therefore of little value to me. Likely not to you, either. For those enriching uranium in Iran’s Natanz nuclear facility, and for those who decided to use a cyber weapon to attack the facility some years ago, quite valuable. (1)

In miles, 500,000 is a round trip to the moon, more or less. How important the accuracy of that number is depends upon whether you’re using it for illustration, as I am here, or calculating a moon trip. (2)

500,000 miles is about 20 longitudinal or equatorial trips around the world. If you’re not an American, and reasonably active, you can expect to walk about one-fifth this distance in your lifetime, assuming you live to be 80. (3) If you’re a typical American, cut this mileage significantly. While you’re at it, cut your life expectancy a bit. (4)

500,000 is the number of passenger pigeons killed in a ten-day period in Petoskey, Michigan, in 1878. This was one of the last mass killings, because after this the population continued its crash to extinction a few decades later. The Petoskey killing lasted five months - 150 days, or 7,500,000 birds. (5) We thought we’d never run out. (6)

If you, like 34 million-plus of your fellow Americans, have diabetes, then roughly 500,000 of you will visit the ER for a diabetic emergency sometime this year. (8)

A SARS-CoV-2 (COVID19) coronavirus is about 120 nanometers in diameter. Pile 500,000 of them one atop the other, and you have a slender stack six-tenths of a millimeter high, or about six sheets of 20-lb office paper (9). Some have calculated the total volume of SARS-CoV-2 circulating worldwide to fit into either a shot glass or one of those 400 soda cans from the prior paragraph, depending on which mathematician you consult. (10)

Which brings us to these very important numbers.

500,000 was a “grim milestone” reported widely across US media, describing the number of deaths attributed to SARS-CoV-2, the novel coronavirus. 500,000 became a number both political and social, used to compare presidents and people, those who believe in vaccines and those who don’t, those who believe in masks and those who don’t, those who keep their distance and those who don’t. And on and on. For a brief period, 500,000 made the rounds. If you turned on the news, scanned the Internet, or listened to the radio, you were exposed to it. Much the same, I suppose, as being exposed to SARS-CoV-2 whenever you frequented a grocery store. And always, the sense of tragedy, the sense that this could have been avoided, the sense that America was different, if only because of the sheer number of people who died here in one year.

There’s a second 500,000 death number. This second number has been buried a bit in time. It’s the 500,000 Iraqi children who, given US policies, had died of starvation over the months and years following America’s intrusion into Iraq late in the last century. In 1996, when confronted with this reality posed as a famous CBS 60 Minutes - Lesley Stahl question, then Secretary of State Madeleine Albright responded, “I think this is a very hard choice, but the price - we think the price is worth it.” (12)

500,000 is a number. A piece of data. It has many different meanings, depending on the knowledge we bring to it. When speaking of death, in one context, it’s far too many. In another, it’s a price worth paying.

Which is it? And who does the choosing?

Numbers are relevant when they hit home.

Obesity kills more people than motor vehicle accidents, but when it’s your loved one, what’s the difference? I haven’t touched on opioid overdoses, which at 83,120 might not be as visible. (13) Or gun suicides, which represent about 60 per cent of all gun deaths but are generally unheralded. (14)

When is a number a price worth paying?

In days when infant mortality was much higher, mothers were told, upon the death of one child, to take solace: “After all, you still have your other children.” Did that help? Would it have helped 500,000 mothers?

This muse is a thousand words long (sans notes, which sadly no one reads). More words, surely, than busy people can afford to read. If you’ve made it this far, I commend you. And I hope, in one thousand words, to have upset you enough that you are, at this point, thinking.

(1) Any number of sources will do, and Kim Zetter has a great book on this and other “zero day” exploits, referenced here: https://www.wired.com/2014/11/countdown-to-zero-day-stuxnet/

(3) How far walking in a lifetime varies. This is a typical source - https://www.moonjoggers.com/how-far-will-you-walk-in-your-lifetime/ that presumes 7,500 steps a day - a figure rarely reached by the typical American, unless in his or her imagination — or in social media posts, which are often projections of the same.

(4) Actually, we’ve been doing a bit better over the past few years, if you removed SARS-CoV-2 from the equation. Possibly better access to healthcare? Still the lowest of the major developed economies. See: https://www.macrotrends.net/countries/USA/united-states/life-expectancy

(6) Or we knew that we would, didn’t care, and killed them even more ruthlessly and intensely to squeeze out the last profits before they vanished. See: https://www.audubon.org/magazine/may-june-2014/why-passenger-pigeon-went-extinct

(7) But we’re doing better. It used to be closer to three years. Even so, we must be substituting sugar for happiness, or something, because look at how happy we are, what our life expectancy is, and how much of this stuff we drink: https://www.statista.com/statistics/306836/us-per-capita-consumption-of-soft-drinks/

(8) I’ll help you out here - see Table 5 on page 11 of this comprehensive report: https://www.cdc.gov/diabetes/pdfs/data/statistics/national-diabetes-statistics-report.pdf

(9) For diameter, you can check my math thus. A coronavirus is typically 120 nanometers (https://www.ocregister.com/2020/04/10/coronavirus-heres-how-small-the-enemy-is-and-how-it-attacks/)

For paper thickness, it’s about 1/10 of a millimeter: see https://www.answers.com/Q/What_is_the_thickness_of_a_sheet_of_paper_in_millimeters

Or just forget the whole thing and take my word for it.

(10) How much volume of SARS-CoV-2? https://www.republicworld.com/world-news/rest-of-the-world-news/total-amount-of-covid-19-virus-in-world-can-be-collected-in-shot-glass-says-mathematician.html

Also, for obesity: https://www.marinij.com/2020/02/09/obesity-the-second-most-preventable-cause-of-u-s-deaths/ which was developed at just about the time SARS-CoV-2 became a “thing.” And what a thing it has been – of the deaths so far, 90 per cent have occurred in countries with significant overweight / obese populations – see https://www.worldobesityday.org/assets/downloads/COVID-19-and-Obesity-The-2021-Atlas.pdf

(12) The infamous snippet is here: https://www.youtube.com/watch?v=4iFYaeoE3n4 Relative population estimates, US (331 million) vs. Iraq (44 million) would create an equivalency of about 3,750,000 American children.

Of course, one could easily argue that this quote is taken out of context. It might also be useful, however, to recognize that America has a history in this region of alternately arming and then punishing leaders - sometimes even at the same time. How else explain the Shah, Atoms for Peace, the Iran hostages, Saddam, Afghanistan, Iran Contra, Stuxnet, and all the rest? Useful if you’re an arms dealer or an oil interest, not so useful if you’re the people straddling the wrong geography while sitting on top of something everybody else wants.

(13) Perhaps atypical due to the pandemic, but even at half this rate would be tragic: https://ohsonline.com/articles/2020/12/28/opioid-deaths-reached-record-number-says-cdc-data.aspx

(14) A fact-check of a slightly higher percentage I’d encountered trimmed it from about two thirds down to about six in ten. Even so, the annual increase in suicides / gun suicides has increased year over year; see: https://www.politifact.com/factchecks/2019/aug/21/jason-miyares/62-us-gun-deaths-are-suicides/